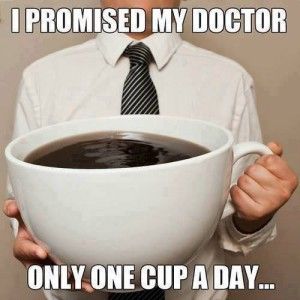 I am Full Blown Caffeinated, a term I will abbreviate in the future as FBC to differentiate between a Pre-Coffee Condition (the dreaded PCC) and Post Coffee Awesomeness (the always welcome PCA). I just finished my 3rd large mug of this fine, but chilly, Sunday morning, and thankfully am thawing and awakening. What am I drinking today? Same as most mornings, and yes, I am aware that the coffee snobs out there will  jeer my rather pedestrian selection but I don't care: Folgers Black Silk.
Why? It's delicious, packs a decent punch, I can make it at home, it's inexpensive, and it's delicious enough to state twice it's deliciousness.

Now a quick note: does my usual coffee selection disqualify me as a commentator of coffee stuff? Well, in a word, no. It's my site, and I will say, and drink, what I want. I will not talk about different blends, or grinds, or methods of brewing, just that first cuppa that gets me going. A good source of information on a lot of that can be found at this blog from Michelle Chacon at https://michellehacon.wordpress.com/.

So it's say 5AM, your alarm goes off, time to get up. What is the one single thought that makes you rise? For some it's ambition, others it is duty, but for me and countless others it's that first cup, and the smell of the coffee maker doing that which it supposed to do, what it is programmed to do: start brewing life.

Oh sure, many of you out there have single cup brewers, and while they are just fine, they are not part of this narrative, but I will say that you do miss out on that coffee aroma that lifts one, body and soul, from the confines of a comfy slumber. Maybe someone should create a coffee smell generator to sell with Keurigs and the like in order to provide that small glimmer of olfactory hope?

For me, that smell of fresh brewing coffee is more than reason to get up in the morning, it give a sense of normalcy, of being grounded.
I grew up with parents who were coffee drinkers. I still remember the sound of the percolator, and later the of new fangled Mr Coffee, the smell of it as it started the days for the folks. The sound of the radio giving traffic updates and news, the smell of weekday breakfasts, the hustle to get out of the house and off to jobs, or for me, school. Of course I did not drink coffee back then, growing up, it was healthy OJ, which was CRAZY bitter if breakfast cereal was consumed first. I remember the parental units angst as the price of coffee skyrocketed up from something like 90 cents a pound, and yes, cans of coffee back in the day were sold by the pound rather than the containers today with say 11.5 ounces per can. I remember them trying to find ways to save on this cost, even trying to re-use grounds by freezing them in foil to brew the following day. Hills Bros, the can had a walking guy wearing a turban tipping back a cuppa. Anyway the reusing the grounds didn't work out, I say while chuckling to myself. Coffee was a constant in our house, and normal to have with, or for, breakfast, and sometimes even with, or after, dinner.

Back in the day there was not drive though Starbucks on every corner, there was no such thing as an $8 cup of coffee, unless you were a fool easily parted from your income. You brewed it at home, you drank it at work, and if you should happen to go to a restaurant there was a chance you had it there too. And on drive through coffee entities that are on vogue today, we'll address that in another post at another time one day.

Back to that first cup, yes it gets me going in the morning, in more ways than one, it invariably leads to that second, and third cup, but for me life would be so different without it. Good mornings start with coffee.