What Is Gourmet Coffee - Where is It?

What defines gourmet coffee? Where do you get it?

Many food items that are touted as gourmet, but few beverages are touted as such. In fact, gourmet coffee is is the only one that readily comes to mind while writing this article. Gourmet water? Soda? Milk? What about gourmet tea? Maybe one of you out there can enlighten me on this and posit in the comments that which informs.

"Gourmet" is often an overused and misused word. Today we view the word as "high falutin," or better than other varieties of the similar products. Gourmet is incorrectly used as a superlative, as a substitute for Excellent, or Supreme, although it can mean exactly that. A little later we will dive into that, too, in relation to coffee.

Years ago, I worked at a pizza joint that touted itself as serving "World Famous Gourmet Pizza." In my way of thinking, and public perception, this would be an extraordinary product.  The pizza was very good, definitely the best around. It was not world famous, by the wat, only locally known, really. But was it gourmet? Was the crust an amalgam of crushed snail shells formed into a paste by adding expertly prepared blowfish eyes. No. The sauce was not made from tomatoes grown by unicycle riding, blind, left-handed, red haired Himalayan monks. Well, perhaps the cheese made from special one teet milk cows that only eat earthworms and live their whole lives laying on pillows which float atop rivers infested with piranha fish? At the south pole? Well, no. Thus, it was ordinary, yet delicious, pizza.

Breaking the word down

As a noun, gourmet means, basically, a connoisseur of food or drink. It describes one's self. It is in the first, second, or third person. Example, "I am a gourmet, a connoisseur and expert at that which is..." You are a gourmet, they are gourmets.

As an adjective describing an object or process, the word Gourmet means:

...of, relating to, or being high quality, expensive, or specialty food typically requiring elaborate and expert preparation...

And there you have it. Pricey. The above is from Mirriam-Webster.

Broken down further, gourmet coffee would be... 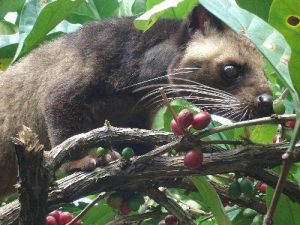 The coffee from the film Bucket List, Kopi Luwak, would technically fit the bill. It is exclusive and rare, and it is pricey, at nearly $36 an ounce. High quality? I am a little squeamish about drinking coffee that first must go through the digestive tract of any animal. Technically, this would be gourmet coffee.
By the way, you can learn more about this, and even buy that same coffee here:
Pure Kopi Luwak
Of course, I also found it for $42 a half pound, ($84 a pound, so $5.375 an ounce) on ebay. Coming from Chicago. Hmmm....

About coffee - gourmet and otherwise

Coffee is not made from a coffee bean. Coffee beans are actually pits, or seeds, similar to the seed you find at the center of a cherry. As a matter of fact, coffee plant fruit is actually called cherries.

There are two kinds of coffee plants and their beans, or seeds: Robusta (Coffea canephora), and Arabica (Coffea arabica). Read up on these to learn all about them. However, I can tell you that Robusta tends to be more bitter, has more caffeine, and is generally cheaper. The coffee connoisseur will tell you Arabica is the only way to go. I agree, but I'm more a coffee sewer than connoisseur. Even bad coffee is still coffee. 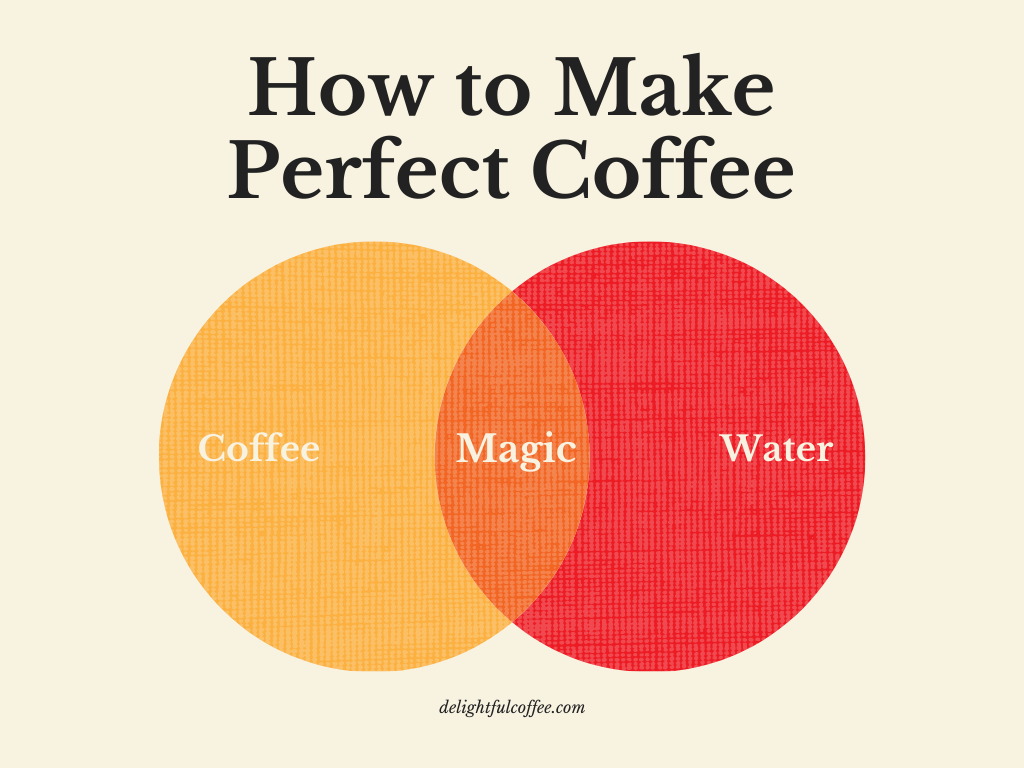 So, what makes gourmet coffee so good?

Aside from the oddball Bucket List coffee, which certainly qualifies, what else is there, besides personal taste, that makes a cup of joe a "tasse de café délicieux"? Well, nothing really. The topic is so very subjective, yet there is a way to quantify it, boil it down, the factors, as it were.

All of the items above factor into the making of a fine cup of coffee. Or, conversely, a crappy one. However, should all the stars align just right, you could end up with the best coffee ever. Or, by using the guide below, you can greatly increase the odds of a great cup of java.

Start with Arabica beans. Life is much too short to even deal with Robusta of Arabia/Robusta blends. Where the beans come from largely determines the flavor. At the same, how they are roasted skews that as well. But, by starting with region etc. that you prefer, this by trial and error, you erase much of the uncertainty.

How old are they?

As much as I hate telling you this, but unless you are growing your own coffee beans, those green beans you just got are likely about 3 months old, or greater. That means the cherries were harvested, pitted, pit kept, fruit fed to animals, sun dried, bagged, and shipped could be months ago, literally! And if those beans are pre roasted? Add time to that. And ground coffee? Tick tock coffee drinker, tick tock. So, green is best, as the dense green beans keep well. Roasted, less so, and ground even less so. Oxygen is the enemy, and even though these are packaged with nitrogen (usually) to push out oxygen, they have still been exposed. Green beans are dense, not much oxygen get in. Roasted are much less dense, hence more oxygen damages the coffee. Ground, forget about it.

As I mentioned above, when coffee is roasted plays a big part in its flavor. However, that pales in comparison to who is was roasted. And by the way, generally the darker the roast, the less the caffeine.

Did you know there is a whole science to roasting coffee? Methods that start hotter, then cool, or start cooler, then heat to the end where they cool again. Mid peak temp roasting. So that variable changes your cuppa a lot. My best advice? Get green beans and roast them yourself. It's all dependent on YOUR taste.

Here you can find home coffee roasters from cheap to mega expensive!

This is another item you have no control over if you buy store sold ground coffee. Yes. individual coffee companies have slightly different coarseness to their grinds, but the difference is minimal. And, like most of the above, you have  NO control over it. You either buy it, or you don't.

The grind you choose, like the type of grinder itself, blade or burr, is largely up to you and your personal preference. The grind, in combination with the other elements, is fairly critical when it comes to gourmet coffee.

Thinking of being a little wacky? Check this out! Cheap too. I think it's pretty neat. 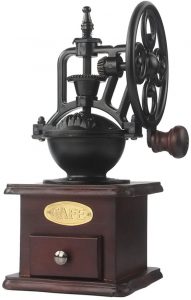 Ah, yes, let the battle begin. Methods of brewing coffee, there are plenty, and the adherents range from the Bill the coffee snob to Wilma the coffee addict, to Sam, who has a cup one a year. Each has their preferred brewing method. For Bill, nothing will do but a French press. Wilma is Keurig all the way, but will drink drip if that's all there is. Sam, he being a former Marine, prefers field coffee. That is a huge tub boiling water, toss a whole can of ground coffee in, let it boil, then toss in some ice, the grounds settle. That's why he drinks so little. So, choose your own method, and always use the cleanest, cool water you can.

And if you want to get all fancy pants, there is this at Amazon. 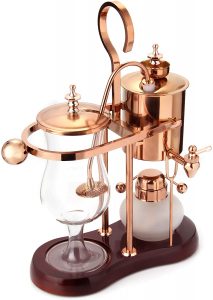 The best coffee you can get daily

In my way of thinking, I want the best cup of coffee, daily, that I can get, but I don't want to spend a gazillion dollars on it either. Think about it, that .64¢ POT of coffee is going to do the job. It will be delicious if you make it right, so why all the fuss and bother? Also, that $20 Mr. Coffee coffee maker will also get the job done. Save the expensive stuff, the gourmet coffee if you will, for special occasions.

If you read our articles often enough, you will suspect that I am not a daily Starbucks fan. Nor am I a daily Keurig user. However, I have a Keurig, but I only use it on the weekends. As far as Starbucks, I may go there a couple times a year. Now this is where it gets weird.

The most accessible gourmet coffee you can get, the closest to that, is Starbucks. When you go back to the Mirriam-Webster above, you have all the elements. "...high quality, expensive, or specialty food typically requiring elaborate and expert preparation..."
Following that you have all the other coffee houses. Yet, the least costly, highest quality coffee otherwise just may be that which pours out of your Keurig machine.

All in all, the best coffee is that which YOU personally enjoy. That is the bottom line. The coffee snobs at Starbucks? Well, all I can say is, keep it real folks.
The fact that I keyed on Starbucks as the simplest way to get fine coffee is surprising, even to me. Let me elaborate:

Nearly all large chains dumb their product down. They reduce everything to the lowest common denominator, in order to achieve consistency. You get the same Big Mac in Tokyo as you do in New York. You get the same Pizza Hut or Dominos pizza in Albuquerque as you do in Duluth.  Are these superb products? Well, they are superbly... consistent. However, Starbucks may not be gourmet coffee per se, but they have managed to not only large, and consistent, but have done so without sacrificing the product. THAT's what makes a $5 cup of coffee worth it. If you're into $5 coffee.