Walking around through various stores, if you have been paying attention, you may have seen Forto coffee shots on the shelves. Apparently I have not been paying close attention, as these little things just came to my attention last week, at my local Walgreen's. Reading up, I see that they are available at a lot of places, apparently, like Walmart, Ralph's, Amazon.com, even, oddly, advertised at Keurig.com. You can also find these coffee shots at their own website, Fortocoffee.com 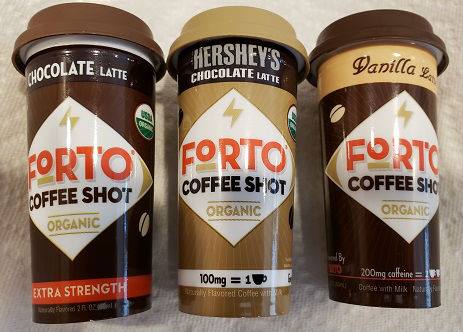 From what I can tell, it looks like Forto Coffee is positioning itself as an alternative to products like 5 hour energy. Or, maybe Monster, or, maybe Redbull. However, this is not a concoction of synthetic caffeine, taurine and b vitamins, like Redbull. So, what's the difference?
Well, here we go: Forto coffee is mostly just a little itty bitty coffee. Cold brewed coffee, yes. Added caffeine coffee, yes. It’s like a cold, small espresso, in a way. These coffee things come in a, well, sort of like a tall Keurig coffee, erm, pod, that is really tall. You don't brew these 2 ounce small sippy pods. They are already filled with liquid. No, you pretty much drink it like a shot of tequila.

So, there I was at Walgreen's picking up a couple items. Sometimes if I just need something simple, I will drive the mile or so to Walgreen's rather than the 3 miles to the supermarket, even if I know I'll pay more. I figure my time is worth something, so it all works out in the wash.  As I'm standing in line ("I See Three", they like to say, like, if three people are in line they announce this and open another cashier) and I'm the three. Or third in line, that is. Atop the soda chiller there are three boxes of this stuff, Forto Coffee Shots, and all three boxes are open, yet full. Not a single one had sold. Okay, they must have been put out for sale recently, right? Much too quickly I was pulled to the adjacent register, away from them. Walgreen's saw three in line.

5 days later, and I stopped in again, and all three boxes were still full. At $2.99 a bottle, maybe that's why? Or, maybe because the boxes were full?  Just for giggles, I bought one, and told the on duty manager that, "You know, if you take a couple of these Forto Coffee Shots out of the box, I'll bet you sell more." People don't much like being the first and maybe only.

4 days after that, I stopped in again, and sure enough, that one I bought turned into 5 sold. The funny thing is, I had still not tried the one I bought earlier. I saw that they had multiple flavors, so I bought 2 additional Forto's to try over the weekend. Interestingly, I found saw on the boxes that the Vanilla Latte flavored type, the same I bought prior, was supposed to have 200 mg of caffeine, where the chocolate and Hersey's Chocolate ones had only 100 mg of caffeine. Okay, whatever, I thought. However, when I got home and read the containers (not really bottles, but more like really tall Keurig pods) I noted that all of them I bought were rated at 200 mg of caffeine, despite what the boxes said.

Drinking a Forto coffee shot isn't like sipping a latte. you literally drink them like a shooter. Interesting, to me anyway, they tasted - and went down - not all that dissimilar to downing a kamikaze in a bar. They have a strong, pungent taste, in other words. I can't call it any simpler than that. It's sort of like taking a couple No-Doz pills, and dissolving them in a sweet, but already strong, coffee. And when the caffeine hits, ZAMO! It hits! I know, Zamo is not a word. I drink coffee, I can make up words if I like. So there.

First though, the challenge

After you remove the hard plastic lid, you find a glued soft plastic "freshness seal," Now, I want you to imagine a small cup of Starbucks filled to the tippy top, with a Swanson TV Dinner style plastic, glued on, sealed cover that you have to peel off. That sort of like what Forto coffee cups have. With each cup, I managed to spill a little on my hands. My advice? Only peel the cover back about 1/2 to 3/4 of the way back. Then you won't have a sudden jolt when pulling the seal all the way off. Don't wear your drink.

What's It Made Of?

Forto coffee Shots are made from cold brewed organic Arabica beans, primarily. This is the main ingredient. What is "cold brewed"? that is where you take ground coffee and soak, or steep, it in room temperature water for 12 to 24 hours, depending on taste. Then you run the coffee through a filter remove the grounds. Most cold brewed coffee is, at this point, cut with about 50 percent water. This cuts down on the strength of the coffee. My guess is that Forto skips this step. They do cold brew it for 20 hours, by the way.
Cold brewing gives a smooth, less bitter brew that is very strong.

Aside from bragging rights, I don't know why Forto uses Arabica beans, when Robusta beans are cheaper, and generally have a higher caffeine concentration. It seems to me that when you're making a high caffeine concoction, the higher caffeine of Robusta beans would be a good thing. Instead, Forto (as in "fortified?") adds, or fortifies, the coffee with even more caffeine. Hey, it's listed separately in the ingredient list.

Are Forto Coffee Shots it worth it?

It depends. I'd be sorely tempted to visit Starbucks for a strong coffee rather than pay $2.99 for a coffee shot. However, I do see some places in my search that sell it for only $1.99 a shot.

You see, I drink coffee as much for the flavor and ritual, as I do for the pick-me-up.
However, if I was really tired, needed a pick up, didn't want the hassle of going to a coffee joint, or did not want to have to use the bathroom for a time, I could easily opt for a Forto coffee shot. For example: on a long drive. It's easy to carry, hard to spill (except when opening) and gives a hearty jolt.

The bathroom part, I mean that. See, coffee is a diuretic. That means for a given amount of liquid taken in, you will expel more. Example: drink a 12 ounce coffee, urinate out 13 ounces waste. Yet, with a 2 ounce shot, I'm not sure how that would impact a person.

I drank two this weekend, and my only advice is to eat something with it. something absorbent, like bread. I drank it both times on a relatively empty stomach, and while I didn't get heartburn or anything, I can see how some folks might. Oh, and don't drink one before bedtime!

By the way, did you know DelightfulCoffee.com is also a community? Yep, just visit us at the community page to sign up! It fun, AND free! Join now!

And if you would like to write an article for DelighfulCoffee, just let us know in the community area.